And here we are, two months later, with the USA election final! The two Georgia run-offs are here at last to decide if the Republicans can hold onto the Senate majority, or if they lose the Senate, the House and the Presidency to the Democrats in the wake of the Trump regime.

Georgia famously flipped blue in November, so that’s got to be promising for the Democrats, right? Well, not necessarily. While the presidential campaign saw Biden win Georgia by 11,779 votes or 0.2% of the voting public (whatever the incumbent may claim), the Senate races panned out differently.

In the general election, Republican David Perdue received 49.7% of votes, beating Democrat Jon Ossoff’s 47.9%. Similarly in the special election, while Democrat Raphael Warnock won more votes than Republican Kelly Loeffler, Democrats across the broad field picked up 48.4% of votes while Republicans took 49.4%. Assuming the votes fall along the same party divisions as November, and voters for third parties and independents don’t vote at all, the Republicans would win both races. The Dems, therefore, have been fighting an uphill battle.

Most polling now has the Democrats ahead, but in a contentious and voluntary vote that has led us astray before.

The Republicans have several advantages tomorrow they didn’t have in November. With Trump absent from the ticket, they are likely to pull in a number of Republicans who had previously been put off by Trump. They’ll also face a deflated Democratic force which can no longer rely on people turning out to beat Trump. I’d consider these Moderate draws.

Republicans can also appeal to a middle section of the community which Trump had previously put off by arguing that even if you aren’t Democrat or Republican, you have an interest in keeping a balance in DC by preventing one party (i.e. the Democrats) from holding Congress, the Senate and the White House unchecked to pass any agenda they like. This is also a Moderate advantage.

It is also a long-accepted fact that lower turnouts favour Republicans, as the least likely to vote groups tend to be minority groups who heavily favour the Democrats. Both COVID-19 and fatigue with the electoral process may result in a low turnout which will hurt the Dems more than the GOP. This should only be a Minor issue, especially compared to the November results where these factors were already in play

Finally, for the Republicans who DO like Trump, candidates Perdue and Loeffler have done plenty to align with the outgoing President, including casting doubt over the integrity of the electoral process. These are two Trumpian candidates who should play well to Trump loyalists, but their sincerity is dubious and many see this as playing politics rather than possession by the ghost of Donald Trump making this only a Minor factor.

The Trump-esque moves of the Republican candidates is a two-edged sword that may give some Republicans pause before voting, and give some fire to anti-Trump voters. This is only a Minor consideration compared to the fact that Trump is now absent from the ticket.

Trump’s own behaviour has also given anti-Trump voters motivation over the last couple of months, with news breaking this week that the incumbent President has been putting pressure on Georgia’s Republican officials to alter the election results. This is probably not changing anyone’s minds about Trump this late in the game, but may give a Minor boost to the Dems.

There is also the motivation of taking the Senate to give the Democrats a clean sweep to pass their legislative agenda. This is a Moderate motivator for Democrats.

The Democratic campaign has also been focusing on maximising turnout and in particular getting first-time voters to the polls. One has to doubt there are many people who didn’t vote in November suddenly keen to vote in January, but registration drives and perhaps the addition of voters who came-of-age in December may provide another Minor boost to the Dems.

Finally, the Democrats may be getting some comfort from an unlikely corner—Trump fanatics. With Trump not running, party-agnostic Trump voters may not bother to turn up to vote, suppressing the Republican votes. Additionally, the large number (8 in 10 by some reports) of Trump voters who believe that electoral fraud occurred in November may now feel there is no point in voting. These could even be a Moderate influence on the results.

It is unlikely that the two races will be substantially different from each other. There will be some differences, for sure, but by and large those enthused enough to vote for one party in one of these elections can be counted on to support the same party in the other while they’re there.

While both sides have a couple of moderate draws, I can’t help but feel the Republican motivations are the stronger, resulting in a stronger red force than in November when, recall, the senate votes for Republicans already beat those for Democrats. This should not be a surprise in a Deep South state like Georgia, of course.

The polls, however, suggest otherwise. FiveThirtyEight has Ossoff and Warnock increasing their results by 5.8 and 3.1 percentage points respectively, putting both ahead from their November starting points. Even without the adjustments that site performs, Democrats led the majority of polls considered.

For once I am not going to follow the numbers. Anyone can reach digits and run calculations, but this time I’m giving some space for political analysis. The Republicans greatest pulls are opening the door for never-Trump Republicans and an argument that losing the Senate gives the Democrats unrestrained power. The Democrats best arguments are that they can finally get things done with all three levels of legislative/executive government under their control and that Trump loyalists will not bother/trust the process enough to turn up. I think on these fronts the Republicans have more to lose and the greater force—the power of fear. After years of gridlock, an obstructed legislative may look more comforting than a single-party, coordinated machine.

Therefore, against the polling and avoiding the caution of articles claiming it too close to call, I suspect that both races will be won by the Republicans.

Posted by PsephologyKid at 07:20 No comments:

And finally, the US House of Representatives. There are 435 of these to predict, so I won't waste time. Tabulated data is provided in a supplementary post for those who wish to play with it for yourselves.

A number of these races have polling. I have used the most recent, likely voter polls from 2020 in these races and multiplied the results by a factor so that Republican + Democrat = 100%, then represented as the Republican share (thus Arizona 1's result of 46.20% indicates 53.80% support for the Democratic candidate). Races where candidates are uncontested or at least have no opposition from the other major party are also factored in here, but marked by party name rather than as a polling value. 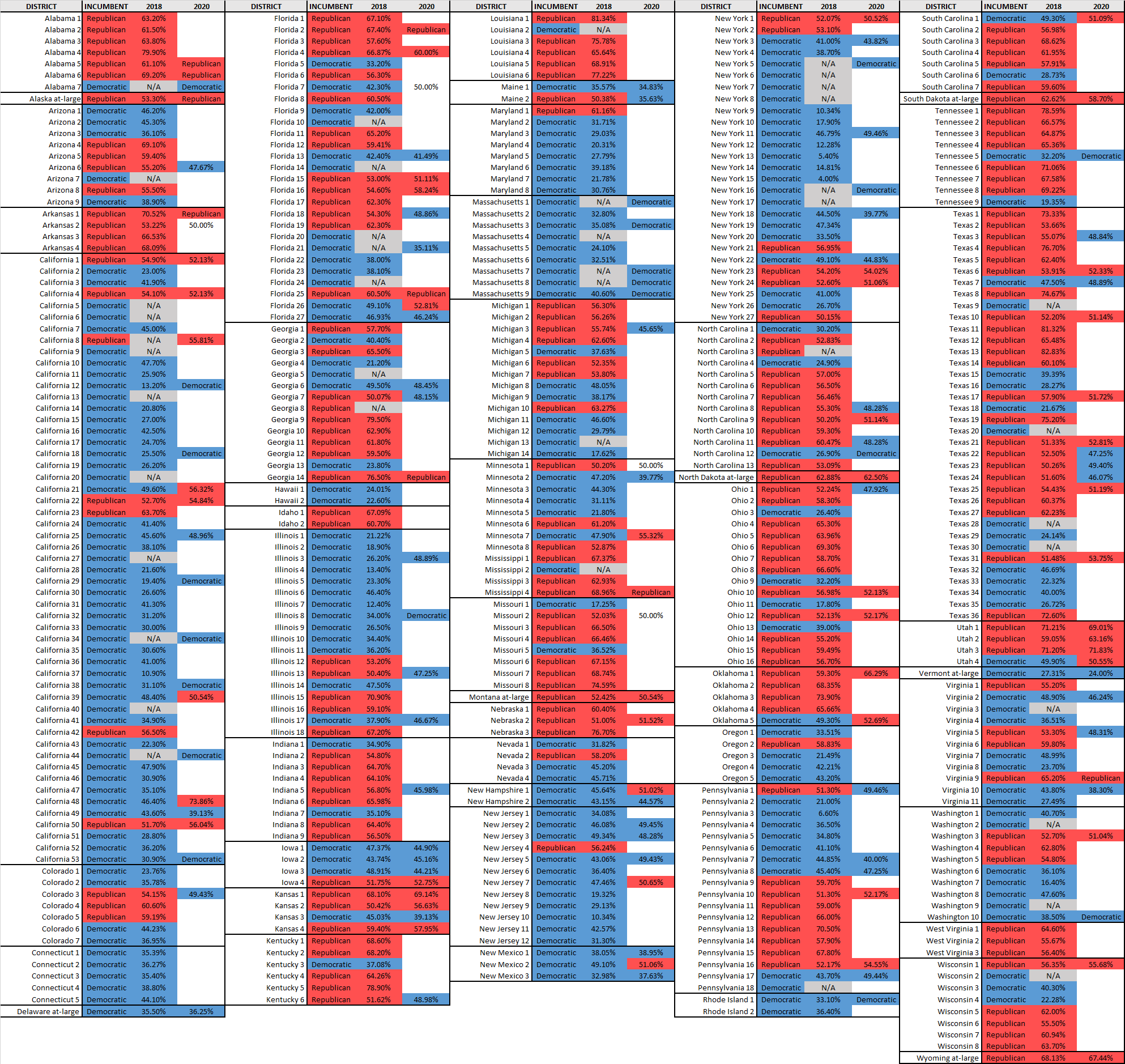 There are also plenty of seats that are foregone conclusions so no-one wastes resources conducting polling there. I've decided on a very safe margin where seats are called when the 2018 vote is at least 60:40 in favour of the incumbent: This fills in a lot of gaps, probably as a result of rampant Gerrymandering in a number of states.

These swings have been averaged for the states as a whole, then applied to remaining districts as an approximation of the localised swing. In the example of Arizona 6 above, this is the only assessable district, so the Arizona swing is assumed at -7.53 below. The other averages are: 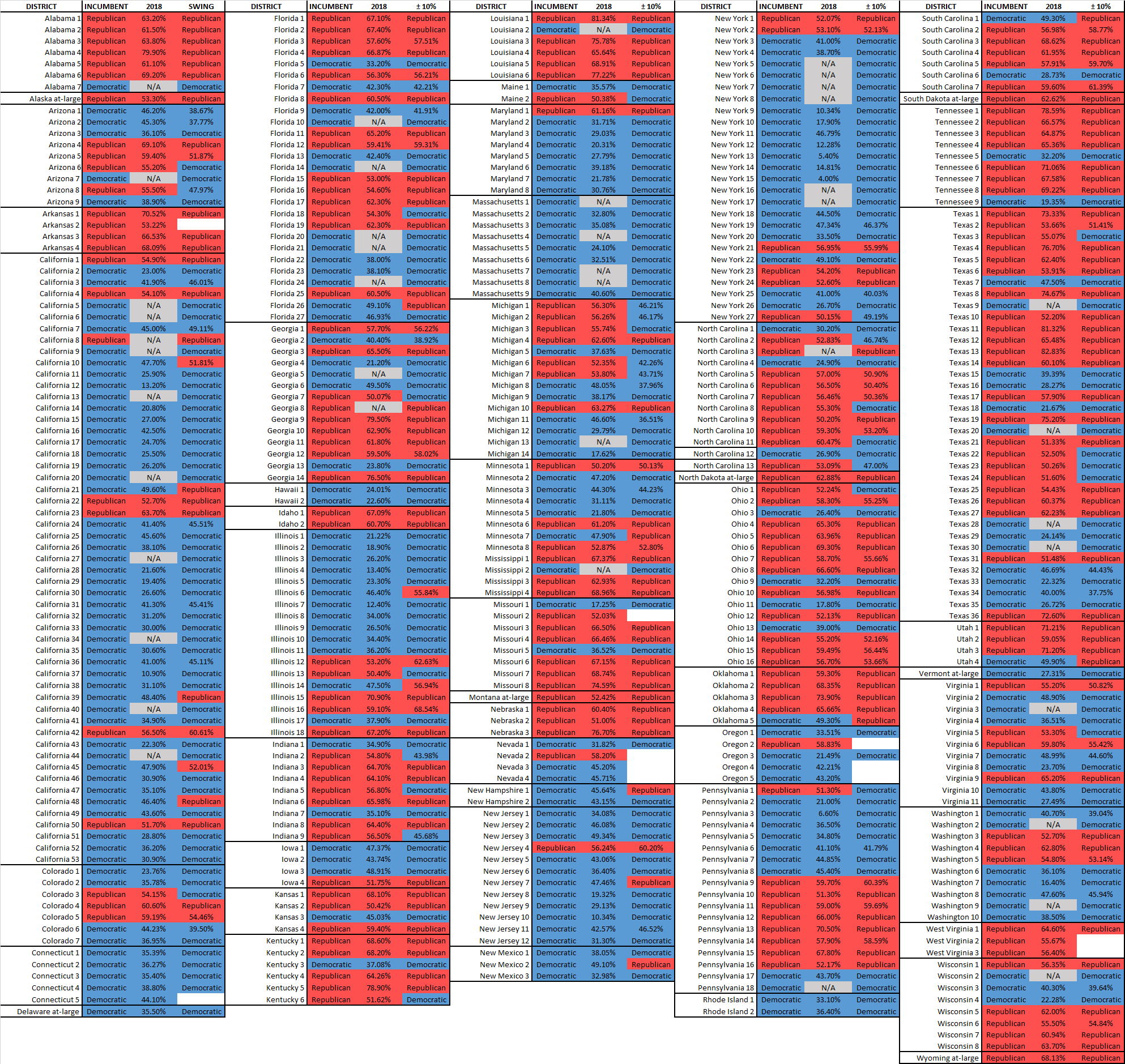 11 Districts remain unaccounted for and are the tossups, but for the sake of completeness:

Arkansas 2 has polling split 50:50 and was a solid Dem seat until a sudden flip in 2010. I'm going to take a gamble and predict a D Gain

Connecticut 5 has been blue since '07 and isn't likely to flip after this divisive campaign. D Hold

Nevada 3 and Nevada 4 are contested but went blue when Trump was elected and stayed blue in the midterms. With Nevada as a whole putting Biden ahead, D Hold is the safe bet

This gives the final prediction: 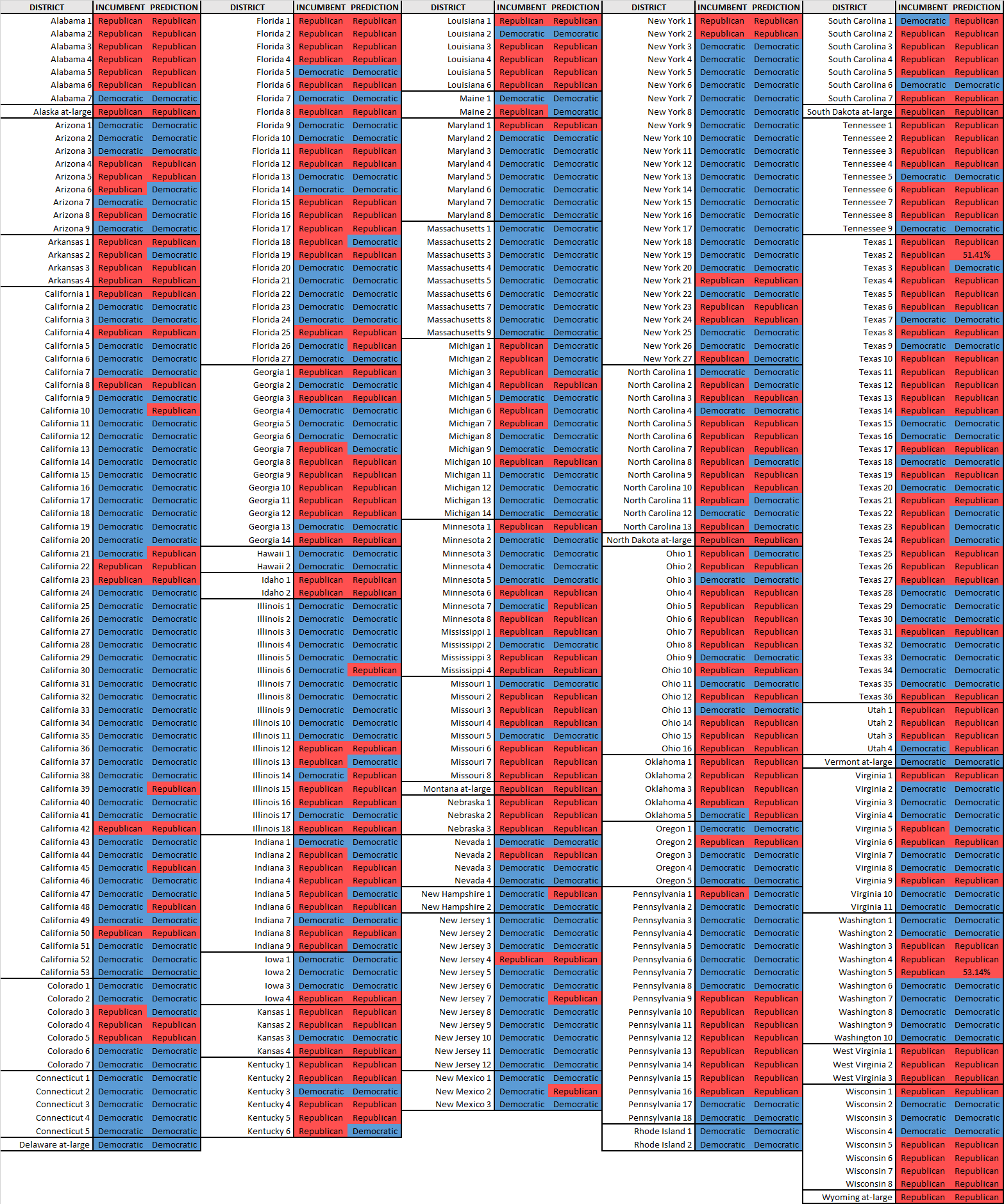 This sees Democrats improve their lead by 14 seats to 248, well over the 218 needed for a majority.

Posted by PsephologyKid at 05:11 No comments:

Posted by PsephologyKid at 05:00 No comments: